Heartbreakers, heartmakers, songs to dance to, songs to sing to, to just enjoy - 35 years on, Ocean Front Property remains one of George Strait's most beloved records.

In a lot of ways, George Strait remains a bit of an enigma wrapped up in a riddle. He has charted 126 singles in America since 1981 and has more number ones than any other artist in history, but he never, ever gives interviews. He comes to the UK for the golf, but hasn’t played a show here since May 1990. He married his childhood sweetheart and has stayed with the same record label – MCA Nashville - all his career.

But in a lot of other ways he’s also one of the most disruptive forces in modern country music because he just doesn’t fit the mould. The key to George Strait is simple and straightforward: it really is all about the music - music that is also deceptively straightforward and simple.

Against a backdrop of outlaw country, pop country, bro country, trap country, alt country and whatever else has popped up in the last 40-some years, George Strait has always been just what he is: a man working slap dab in the middle of the tradition, and working on a level of such phenomenal consistency that it almost seems boring.

Six years into his recording career, in January 1987, George released his seventh album, Ocean Front Property, and 35 years on it remains one of the best ways to enter his world. Millions of people did – it was the first country album to enter the Billboard chart at no.1, it went double platinum in seconds and it spawned three enormous hit singles, two of which became signature songs.

Clocking in at just under half an hour, all the Strait hallmarks are there, from the smooth relaxed timbre of his voice to the classic structure and tone of the 10 songs and the traditional instrumentation used to play them.

Dig a little deeper, and the subtleties begin to emerge. Most of the album features the A-list Nashville session players of the time – Paul Franklin on steel, Johnny Gimble on fiddle and mandolin and so on – but you can also find Steppenwolf’s Larry Byrom, the archetypal West Coast bassist Leyland Sklar and the finest Southern soul guitarist of them all, Reggie Young.

Even more radically, in an era where the studio was the studio, the road was the road and never the two shall meet, on two songs - ‘Hot Burning Flames’ and ‘You Can’t Buy Your Way Out of the Blues’– Strait eschews custom entirely and is backed by his touring musicians, the Ace in the Hole Band.

It’s practical, efficient music, a sound designed and executed to make your day better. Songs to dance to, to sing along to, to just enjoy. Songs that make no demands on you unless you come to them. Clever, witty songs like ‘All My Exs Live in Texas’ or the title track itself. Heartbreakers, heartmakers and tucked away towards the end, one of the great lost songs of country music, ‘Second Chances’ - simultaneously romantic, sympathetic and voiced by a tough singer you’d best stay away from if you’re having any thoughts you perhaps shouldn’t be.

George Strait's Ocean Front Property celebrates its 35th anniversary in 2022. You can purchase the records from one of Holler's selected partners below: 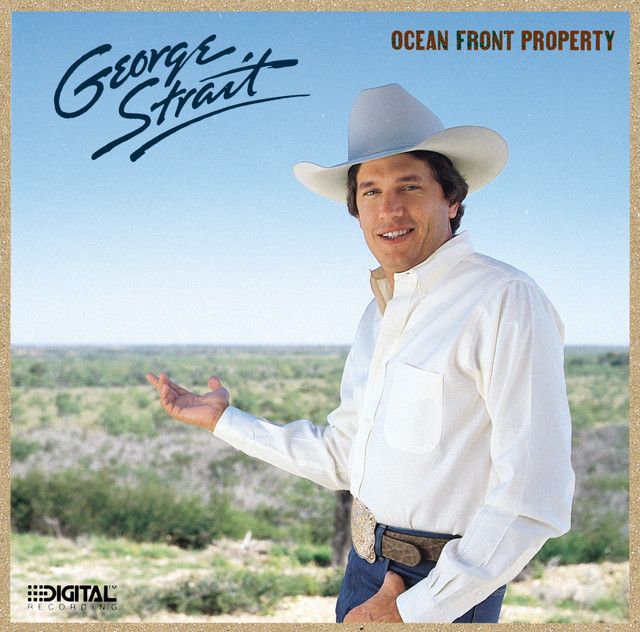 Where Have All The Cowboy Songs Gone?