A Guide To: The Best CMA Awards Moments

Awards ceremonies are notoriously juicy affairs, and the Country Music Association’s annual awards show is like a truck full of watermelons on the way to a watermelon festival.

Ever since the first ceremony in 1967, the yearly roundup of country music’s biggest winners has been one of the highlights of the country calendar. This year the CMA Awards show returns to the Bridgestone Arena in Nashville for the 56th year.

Hosted by Luke Bryan and Peyton Manning, it’s sure to be a night to remember, with performances set to be announced in the coming weeks.

Other awards shows might have Lady Gaga in a meat dress, Miley Cyrus twerking, Mick Fleetwood and Sam Fox’s car-crash co-hosting and Madonna snogging Britney Spears and Christina Aguilera, but the CMA Awards have had more than their fair share of memorable moments too.

Here, Holler takes a look back at some of the most unforgettable.

Dolly Parton might be one of the greatest icons in country music history, and in 1978 she was about to take to the stage to accept her first-ever Entertainer of the Year award at the CMAs. But just before she did, she sat down and completely split her dress.

Kenny Rogers’ wife hurriedly lent her a fur jacket to hold in front of her as she stepped out onto the stage to accept the award. In her acceptance speech, Dolly joked with the audience, “My daddy said that’s what I’d get for putting 50 pounds of mud in a five-pound bag”. 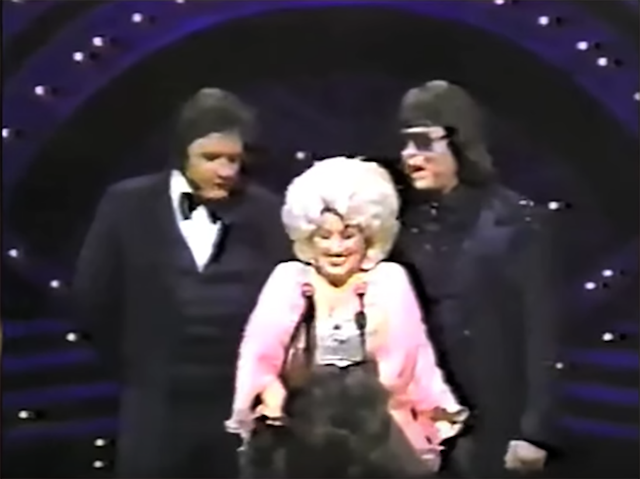 Jason Isbell and Amanda Shires have had enough

If the CMA had wanted a drama-free show in 2020, they went a funny way about it.

Despite not having an actual In Memoriam segment, the awards show did pay tribute to Charlie Daniels, Kenny Roger and Joe Diffie, who had all died that year.

Unfortunately, much to the dismay of anyone who cares about country music, John Prine wasn’t included in the tributes, and Jason Isbell and Amanda Shires, watching at home, took action.

“Due to the Country Music Association’s failure to mention John Prine, Jerry Jeff Walker and Billy Joe Shaver at the CMA’s last night, Amanda Shires and I have decided to return our membership cards”, Isbell wrote on Twitter. “I doubt anybody will care, but we cared a lot about our heroes”.

At the 55th CMA Awards in 2021, back in front of a live audience again, Mickey Guyton began her performance of 'Love My Hair' by bringing Faith Fennidy, the young Black girl who inspired it, out on to the stage. In 2018, an 11-year-old Fennidy was sent home from school because the teacher said her braids were “distracting.”

Guyton was joined onstage by Brittney Spencer and Madeline Edwards in matching white lace gowns, and the three singers gave a pin-drop performance of the song that visually looked like a scene from heaven.

“I found my freedom when I learned not to care / Now I'm not scared to love who I am” the trio sang and the CMA awards finally felt like it was beginning to look like the inclusive space it claimed it wanted to be. Until Jason Aldean came out and ruined it all just by being there.

This was the moment in 2015 when Music Row’s best-kept country secret got let out of the bag.

After performing a duet with Justin Timberlake of the George Jones classic ‘Tennessee Whiskey’ and Timberlake’s own ‘Drink You Away’ - transformed for the night into a stone-cold country-soul classic - Chris Stapleton went on to win all three of the awards he was nominated for.

The day after the awards, it felt like the whole world of country music had been turned upside down. Country music radio, who up until that point had almost completely ignored Stapleton, suddenly seemed woefully out of touch.

A week later, Traveller was sitting at the top of the Billboard Top 200.

In November 2001, two months after the September 11 attacks, Alan Jackson performed ‘Where Were You (When the World Stopped Turning)’ at the CMA Awards, a song he’d written on the same day as the attacks.

“I'm just a singer of simple songs / I'm not a real political man / I watch CNN, but I'm not sure I can tell you the difference in Iraq and Iran”, he sang, articulating the grief and shock of America with a simple straightforwardness that made this one of the CMA awards’ most unforgettable performances.

Taylor gets the last laugh

Remember when Kanye West jumped on stage and interrupted Taylor Swift during her acceptance speech for the Best Female Video award at the MTV VMAs in 2009?

Well, the country music community got its own back and made sure Kanye was the butt of more than a couple of jokes at the CMA Awards.

First there was Brad Paisley and Carrie Underwood singing “Mamas, don’t let your babies grow up to be Kanye”. Then Little Jimmy Dickens interrupted Brad Paisley talking about his own ‘Welcome To The Future’ music video, saying, “Excuse me! I’ll let you finish later. Now Brad Paisley, I know you had a nice video and all that, but Taylor Swift made the best video of all time”.

Even Taylor herself couldn’t resist alluding to it in her acceptance speech for Best Female Vocalist, jokingly thanking “every single person in this room tonight for not running up on this stage during this speech.” 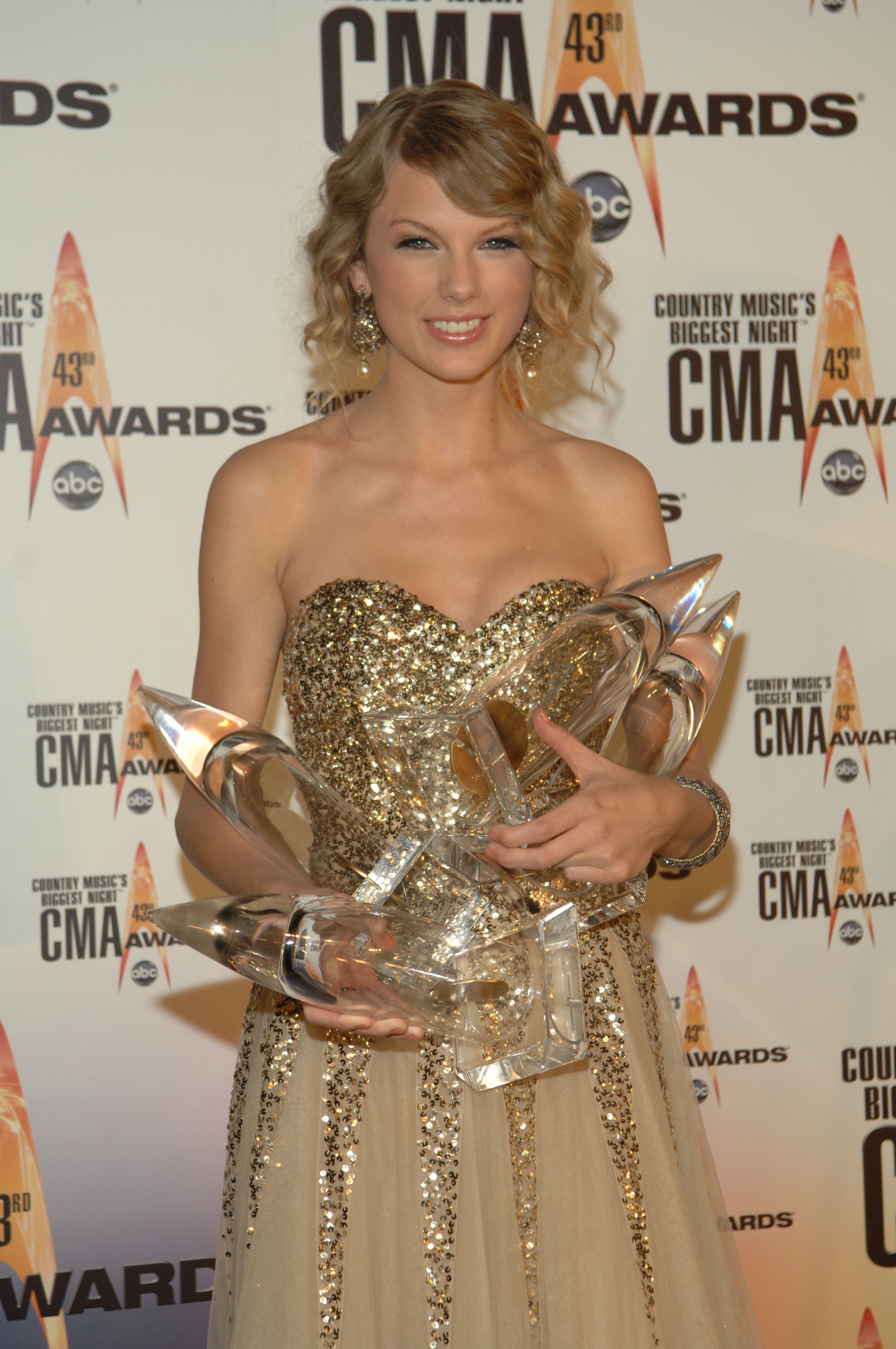 In 2017 Sturgill Simpson showed that he didn’t actually need to be invited to the CMA Awards to make the headlines with a performance, when he turned up with an open guitar case and his Grammy Award outside Nashville's Bridgestone Arena, taking questions from fans and busking for donations to the ACLU.

For just under an hour he shared his views on everything from Donald Trump, LGBTQAI+ rights, his love of ELO, Run The Jewels, and the Black Lives Matter movement.

He even performed a couple of songs.

In 1999 country legend George Jones was nominated for Single of the Year for his song ‘Choices’, but he was only given one minute of stage time and told to play an abridged version of the song by the CMA.

Jones refused to play a shorter version and stayed home instead, but his close friend Alan Jackson wasn’t about to let it go. Halfway through performing his own song ‘Pop A Top’, he stopped his band and broke into an unrehearsed impromptu version of ‘Choices’, much to the delight of the crowd.

Apparently, Jones, who was watching on TV at home, was moved to tears. 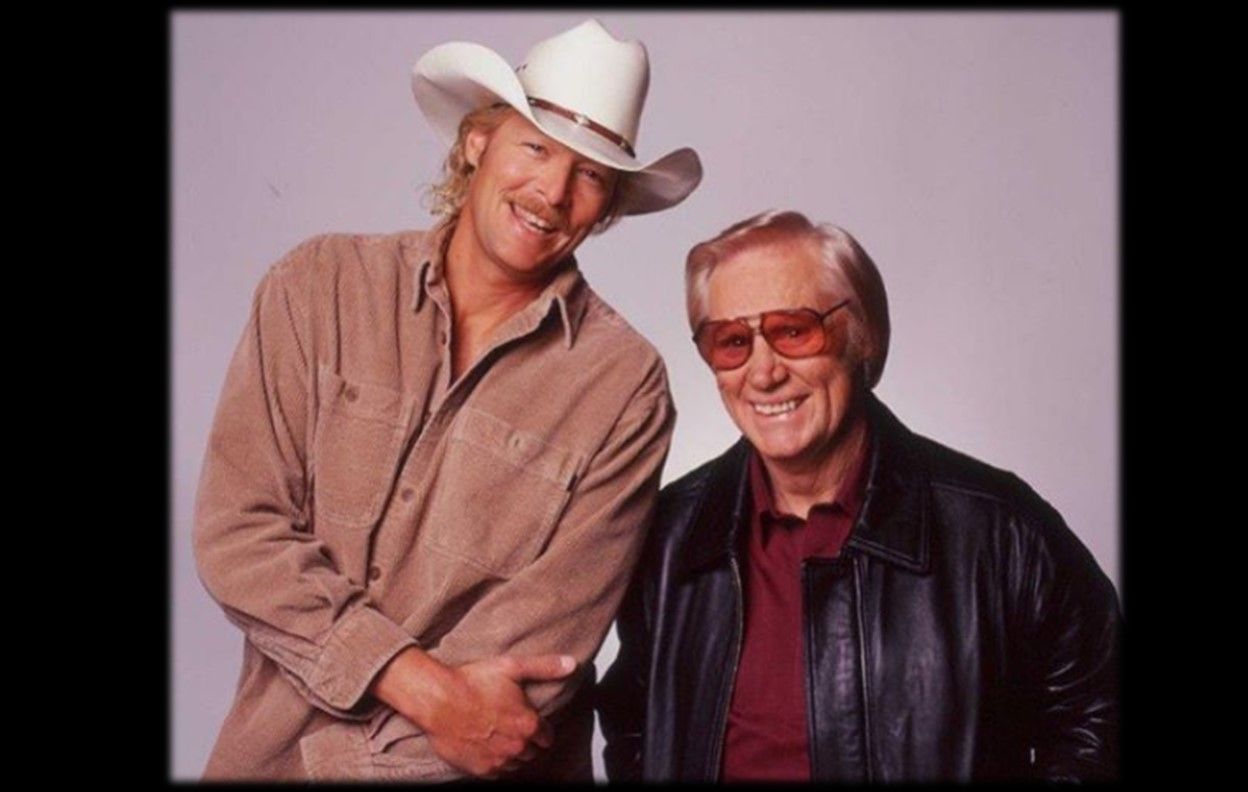 Country schooling from The Chicks and Beyoncé

The Chicks must have known what they were getting into at the 50th annual CMA Awards, when international pop megastar Beyoncé performed the song ‘Daddy Lessons’ alongside the country outcasts.

They opened the performance with each of them repeating the word “Texas”, reclaiming the very state that they’d been demonised for defending 13 years earlier, before blowing through a twanged-up version of the cut from Lemonade and weaving in a little ‘Long Way Home’ for good measure.

The sheer cultural weight of Beyoncé performing on stage at a country music awards show was also a timely reminder to the establishment that country music was built on the contributions and traditions of people of colour.

In 1974, a country music shitstorm blew up when Olivia Newton-John was announced as the Female Vocalist of the Year.

Nominated alongside Loretta Lynn, Tanya Tucker, Anne Murray and Dolly Parton, to the country music purists she represented everything that was wrong with watered-down mainstream pop-country.

Outraged by the decision to give the award to her, 50 or so of the biggest artists of the time – including Dolly, Porter Wagoner, Brenda Lee, Barbara Mandrell, Conway Twitty, Dottie West, and Faron Young – gathered at George Jones and Tammy Wynette’s house after the show for a crisis meeting.

They put their names to a declaration claiming that country music was “losing its identity” and called for an organisation that represented “the interests of country music artists exclusively”.

A week later the short-lived Association for Country Entertainers was formed in protest at the infiltration of “non-country” artists. Olivia offered to return the award, but the CMA wouldn’t accept it back.

A year later, and this time Charlie Rich was at the centre of the shit storm. The previous year’s CMA Entertainer of the Year, he took to the stage to announce the winner of the 1975 award.

After struggling to tear open the envelope, he read the name of the winner silently to himself, took a zippo out of his jacket pocket and set fire to the piece of paper, eventually announcing John Denver as the winner.

Denver graciously accepted the award via a satellite link-up, blissfully unaware of what had just happened. Charlie Rich was subsequently blacklisted from the CMA Awards and in later years, blamed the moment on prescription medication and too much gin and tonic.