A Guide To: Country Singers' Cocktails

It’s World Cocktail Day, so the Holler team decided to take some time off and head to the nearest bar to road test some of your favourite country singers’ signature cocktails. Get the paper umbrellas out, there’s a whole lotta shakin’ going on. Here are 10 of the tastiest country cocktail recipes doing the rounds.

Honestly, the things we do for you, dear readers. 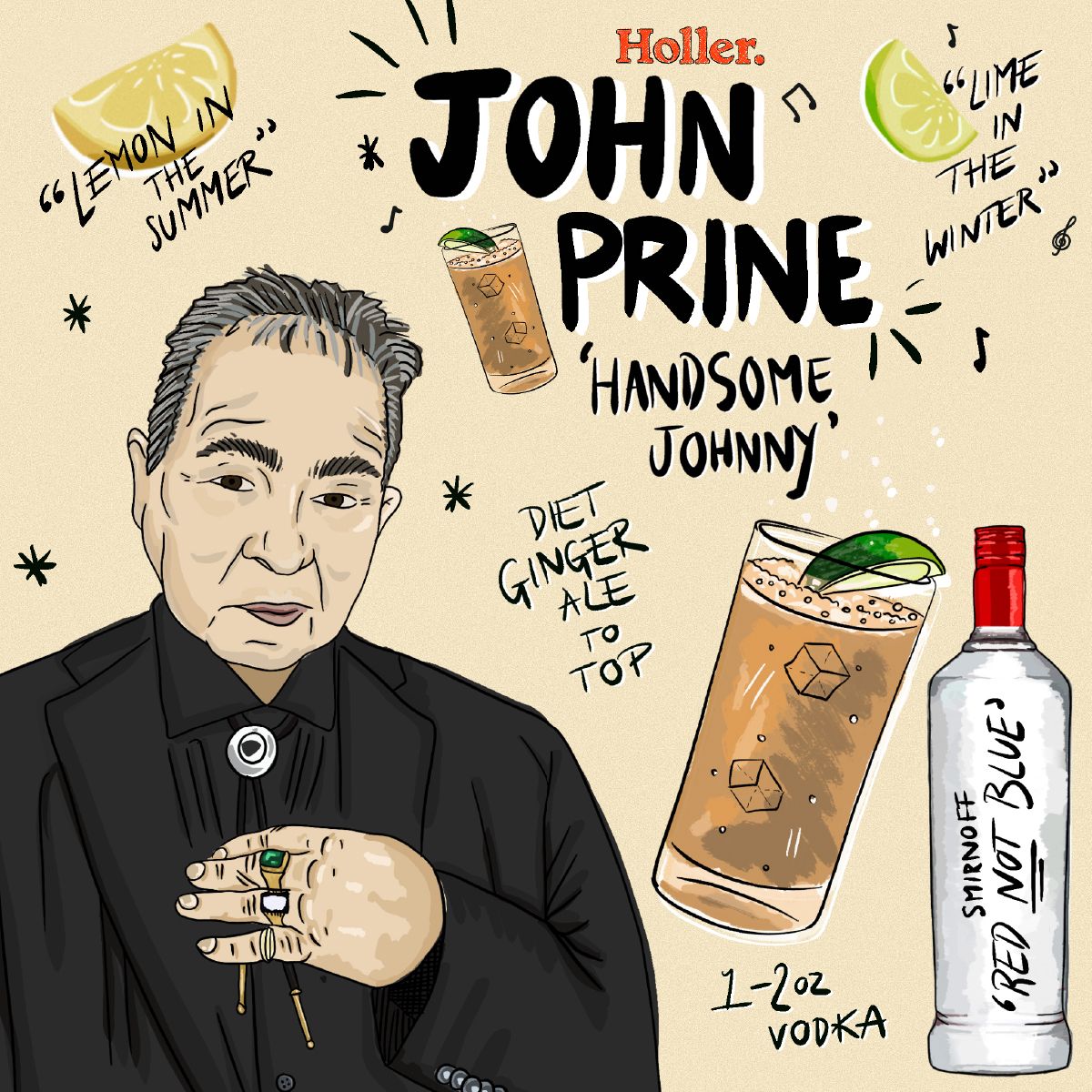 As well as all the hundreds of beautiful songs John Prine brought into this world, he also left us with the recipe for his own signature cocktail, the perfectly named 'Handsome Johnny'. He even mentioned the cocktail in the lyrics to ‘When I Get To Heaven’, the last song on what turned out to be his last album, The Tree Of Forgiveness. “I’m gonna get a cocktail: vodka and ginger ale”, he sang, as he listed off all the things he was going to do in heaven when he eventually got there.

“I named it kind of after myself, but I thought Handsome Johnny sounded like a Rob Roy or a Manhattan,” he explained in an interview on SiriusXM Outlaw Country. “Now every bar you go to has a cocktail list, but 20 years ago - when I started drinking Handsome Johnnys - people wouldn’t make you a Rob Roy or a Manhattan, they said that was old school. Now they’ve come back around again.”

It’s a fairly simple cocktail to mix up - just two ingredients and a slice of fruit – but John did leave some very specific instructions for exactly what should be in it. “It’s Smirnoff Vodka. Red Smirnoff not blue. If you get too good vodka it kills the bubbles in your ginger ale. I use diet ginger ale because the other kind is too sweet after a while; you don’t want to get diabetes from drinking it. And in the wintertime, I drop a lime in it - don’t squeeze it - just drop it in from about six inches above. And in the summertime a lemon.”

Sounds simple enough, but what does it taste like? Who cares?! John Prine invented it. It could taste like dishwater for all we care!

Enough Ginger ale to top off  the glass

Slice of lemon in the Summer

Slice of Lime in the Winter

Fill a cocktail glass with ice

Drop the lemon or lime in from six inches. Do not squeeze.

What exactly is it that Lainey Wilson is tipping back til she can’t walk, while she’s cutting loose like a chainsaw, getting plastered like a drywall, hammered like an old bent nail and jacked up like a four-by in her song ‘Straight Up And Sideways’, we wondered? Well, it turns out it’s probably her own signature cocktail, appropriately called a 'Saying What I’m Drinkin’.

“I met a bartender at The Dive Motel in Nashville where I took the photos used for my album Sayin’ What I’m Thinkin”, she explained to Holler. “The bartender and I have become friends and he made this drink especially for me to celebrate my album release day. It’s refreshing! A great drink whether you’re in a bar or sippin’ on it poolside.”

We’ll be the judge of that, Lainey. Here’s how you make it.

Lime or Salt for garnish

Add all ingredients to an ice-filled shaker and shake

Strain into a glass with ice

The Holler verdict: A straight-up no-nonsense punchy little cocktail with a cheeky Louisiana kick to it. Absolutely delicious, but definitely not to be messed with. We’d have happily drunk these all night. 9 out of 10. 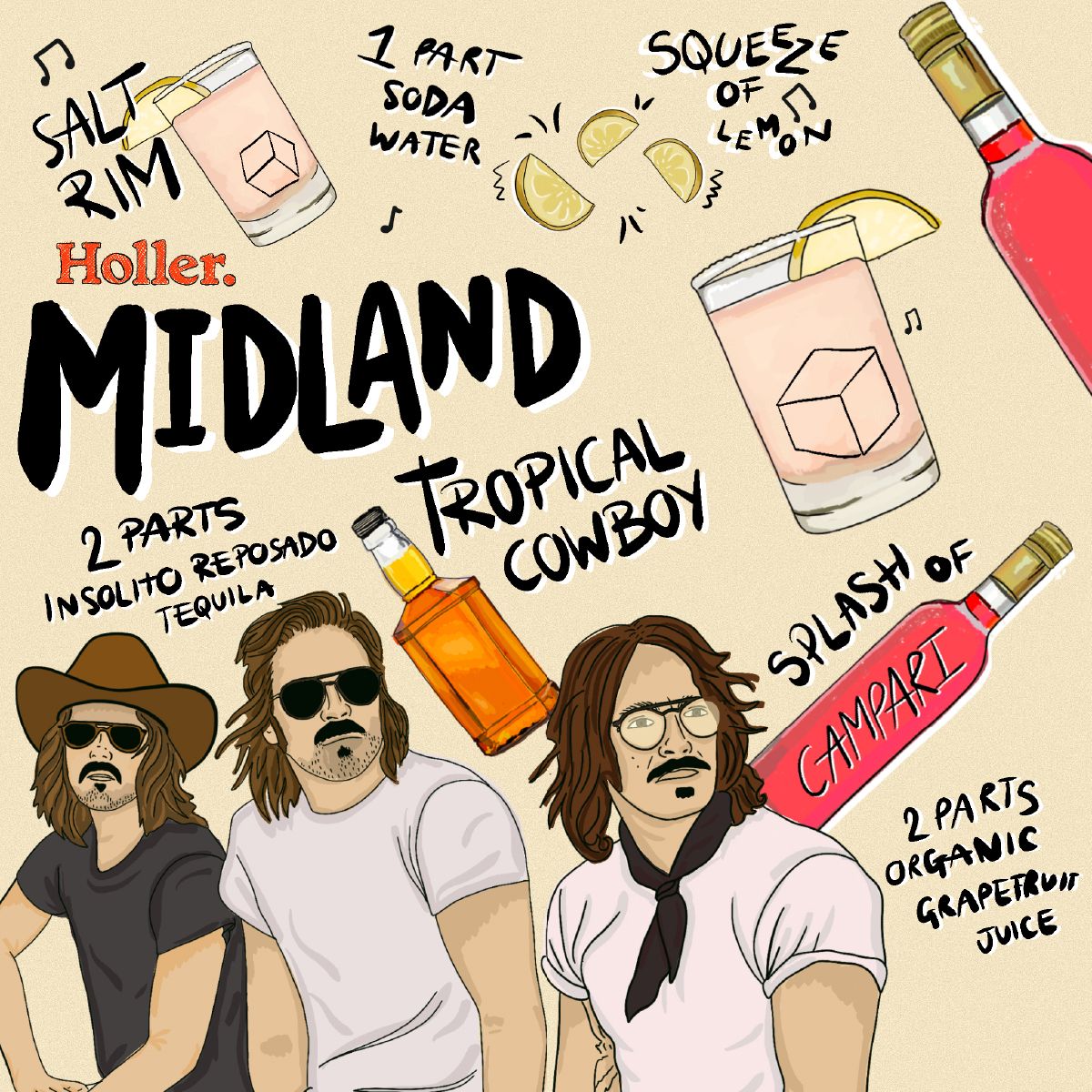 The Gator Boys definitely seem like the kind of band who know their Bostons from their Cobblers. They’re even ambassadors for a brand of super premium small batch Texas tequila! As Mark Wystrach explained, “I grew up in a bar and I have made a living as a bartender and server for many years, so I do know my way around a cocktail kit”. With all that in mind, here is their signature recipe for a 'Tropical Cowboy'. Presumably served on the rocks.

A splash of Campari

A squeeze of lemon

Salt the rim of a glass

Shake the rest of the ingredients up in a cocktail shaker

Pour over the ice

The Holler verdict: Surprisingly light and refreshing. Disarmingly smooth and charming, it went down way too easily considering how much tequila was in it. We had no problem drinking this at all! 9 out of 10.

Is there anything more country than celebrating the release of your brand new record by inventing a brand new cocktail to go with it? Thomas Rhett has done just that for the release of Country Again (Side A), and just like the album it’s named after, it’s a refreshingly full-bodied take on an old classic. When you’ve got the right ingredients it doesn’t need shaking up. Just put it on ice and drink it down.

Orange Zest and garnish with an orange peel

Stir together and serve over ice

Holler Verdict: Less is more sometimes. All you need is tequila and fizzy water and a little sunshine and you’re back on track. Four cocktails down and we really appreciated the lightness and simplicity of Thomas Rhett’s Country Again cocktail. Like an old friend with a reassuring hand on our shoulder. 8 out of 10

“My signature cocktail is a 'Ranch Water',” explained Hailey Whitters matter-of-factly. “It's just tequila, Topo Chico, and lime. I like to keep it easy and light, especially in the summertime!” It might not have technically been invented by her, but Ranch Water is such a perfect fit for Hailey Whitters they might have to rename it after her. It’s a Texas-style bubbly highball cocktail with a little lime kick. Pull up a stool next to Janice at the hotel bar. Here’s how you make it.

Add the tequila and lime to a highball glass and stir

Fill with ice and top up with sparkling water

Holler Verdict: A charmingly simple and no frills cocktail. A Texas classic with a refreshing bubbliness. We’ll be fillin’ our cups with this one long into the night! 8 out of 10. 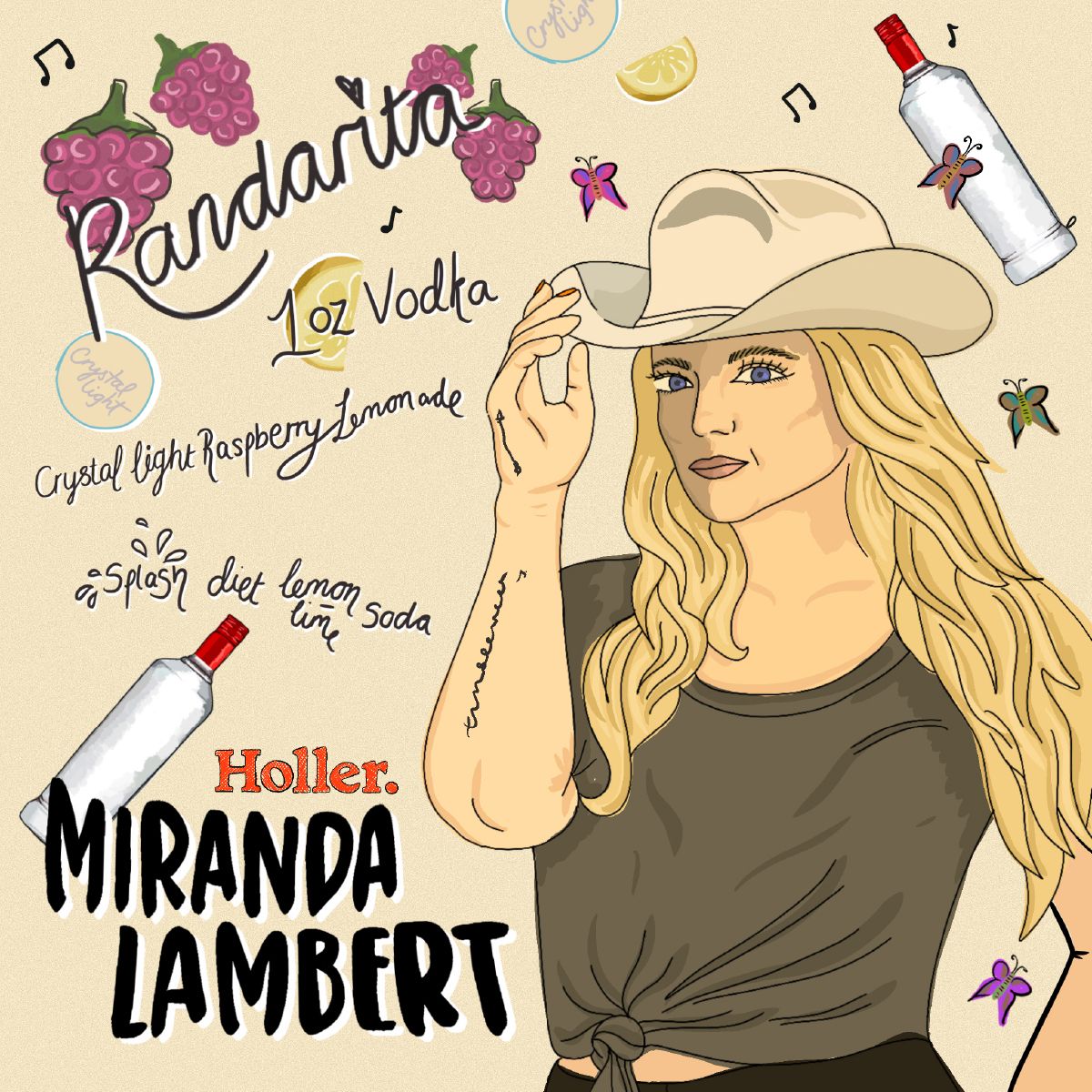 Two of country music’s most notorious signature cocktails come courtesy of Miranda Lambert. The elusive 'Lambertini' - whose recipe still remains a secret –and the much loved 'Randarita'. Invented by Miranda Lambert around the time of her Platinum tour, it’s a low calorie cocktail made with Crystal Light powdered drink mix that she concocted to fit in with her energetic lifestyle on the road. “My trainer, Bill, approves. I mean, he’d rather me not drink, but that’s not an option,” Miranda explained at the time. “I have one before a show and a half during.”

The Holler team didn’t think the bar would have Crystal Light so we ordered some off the internet a few days before we went. Luckily it comes in handy little pocket sized sachets so no one suspects if you just order a vodka with soda and discreetly add the Crystal Light afterwards. Although the lurid pink colour might give it away when they come to collect your glasses at the end of the night.

1 packet of Crystal Light On The Go Raspberry Lemonade Mix

Add ice and vodka into a 12oz glass

Take the bottle of water and add 1 packet of Crystal Light Raspberry Lemonade Shake it up to mix.

Add a splash of soda

Holler Verdict: It tastes like you’re literally drinking sherbet!! You can hardly taste the vodka at all, which is quite dangerous. Lively and fruity with a sassy punch, it’s a bit like drinking cherryade after you’ve just brushed your teeth. Something bad could definitely have happened if we’d have drunk Randaritas all night. 6 out of 10.

Towards the end of last year, the reigning ACM and CMA Female Artist Of The Year shared her own take on a perennial cocktail classic. “I’m not a sweet margarita fan,” she wrote. “But this one I’ve tinkered with for a couple of years is tart and perfffect”. Well, we’d better get tasting then!

Add all the ingredients to a cocktail shaker

Shake well and pour over ice

Holler Verdict: It’s not that this Margarita is doing anything that different from any other Margarita, it’s just that whatever it’s doing it’s doing it so much better than all the other ones. Everyone else might as well give up making Margaritas if Maren Morris has got a recipe. 9 out of 10.

If Maren Morris has the best Margarita recipe, then everyone’s favourite day-drinking foursome Little Big Town have by far and away the oddest. Very much a case of too many mixologists here, this is what happens when four people try to make one cocktail. “It’s easy to make and dangerously easy to drink,” Little Big Town warn. Holler were brave enough to take it on. Or at least by this point in the night, we were drunk enough.

Mix it all together in a big cup

Holler Verdict: Just like Little Big Town, all these wildly different things shouldn’t work together, but weirdly they do! And it’s incredible! The grapefruit in the Fresca mixes with the orangey flavour of the Blue Moon beer, while the limeade and the tequila are working together in kind of the same way as a Hillbilly Margarita. It was actually very drinkable. Although over drinking of it is obviously not recommended. 7 out of 10. 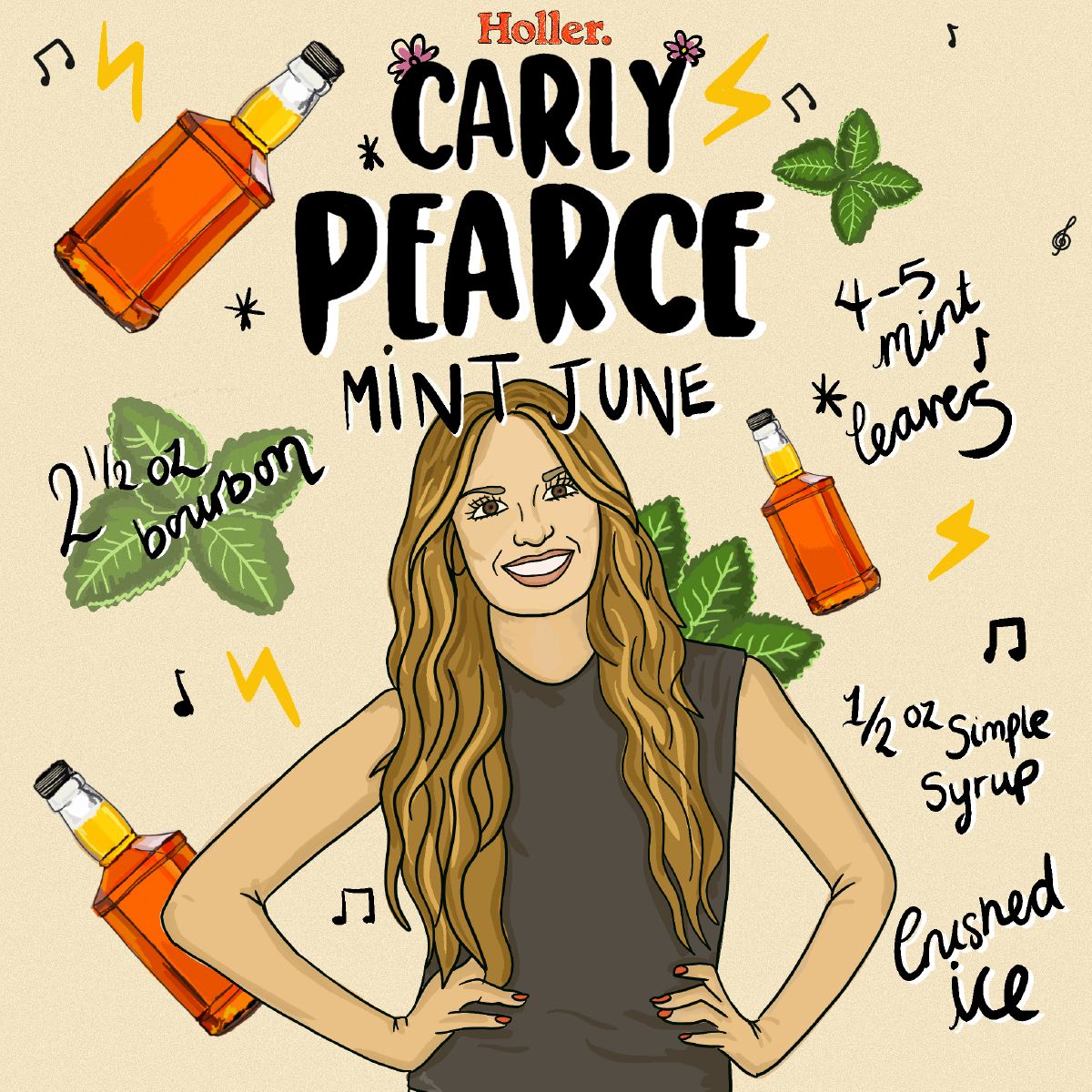 We all know Carly Pearce is a Cabernet girl at heart, but despite being known for songs like ‘Hide The Wine’ and ‘Lightning In A Bottle’, she’s also partial to this refreshingly light Kentucky classic. "When I want to switch it up from a usual glass of red wine, I love to grab some bourbon from my home state of Kentucky”, she told us. “Mint Juleps are the perfect, classy, summer cocktail. Obviously, my sweet dog June won't be enjoying with me, but of course, I'm going to name it after her!"

Muddle the mint with the simple syrup in a glass

Holler Verdict: A refined and sophisticated classic. Elegantly sweet and dangerously drinkable, it’s the perfect cocktail for an afternoon in the sun. Minty and refreshingly moreish, with just enough alcohol to help you forget how hot you are. We could really get messy with these. 9 out of 10.

If we struggled with the recipe for Little Big Town’s cocktail we were about to end the night getting our minds and taste buds completely blown by Charlie Worsham. One of Nashville’s true originals, his latest single ‘Fist Through This Town’ has hardly been off the Holler stereo all month, and his recipe for 'The Jumper' is just as off the wall as his own peculiar brand of country. Last orders at the bar!

A toke off a friend’s joint

Half a pitcher of Yazoo pale ale

Travel back in time to mid-2000s Nashville to a Monday night. Bum a ride to the gravel lot outside the Station Inn. Toke the joint before entering venue. Pay cover, order pitcher(s) of beer, maybe a “thing” of popcorn and/or a pizza. Find an open table if you can. Garnish heavily with the music of the Time Jumpers. Nip whiskey each time they ring the cowbell.

Holler Verdict: Are we drunk or is he drunk? Are you drunk? We really don’t know what’s going on anymore. I think we’ve been at this bar too long. Time we called it a night. As the Charlie Wosrham songs goes “Take me drunk, I’m home”. 10,000,000 out of 10.

A Guide To: The Troubled Relationship Between Fonts and Country Music

A Guide To: What Is Americana?

A Guide To: Country's Most Iconic Couples