The wine, the beer, the whiskey.It reads like a menu of what you might need to make it through these months of quarantine. Those three drinks don’t exactly work well together - but poured evenly into a shaker and mixed with some tight harmonies and a brass section and you’ve got yourself a huge hit for Little Big Town. This song, like many of the band’s hits, came along when they were least expecting it; they even admit it was one of the fastest songs they’ve written.

Kimberly Schlapman and Phillip Sweet are together at a studio on Music Row, while Karen Fairchild and Jimi Westbrook join the interview from their home south of Nashville - it’s a different feel for LBT.They are laughing and a bit giddy, this is a rare occasion for a band that are not only rarely apart when doing interviews, but rarely apart ever. They have been touring together as Little Big Town since 1998, while Karen and Jimi have been married since 2006.So at this point in their career, Little Big Town is more of a family than a band, and this family doesn’t like to be separated. Our chat is like being in a family meeting – mostly laughter, with a bit of business mixed in for good measure.

Their 22nd year together was set to be a big one. It started with the release of their ninth studio album, Nightfall in January of 2020, an album they debuted at Carnegie Hall. It had been 13 years since a country artist had played at the world-renowned theatre, with the sold out show turning out to be a smashing success. This debut was like no other for Little Big Town, it was grand and theatrical.The tour was meant to take on that same feel, with the band scheduled to play some of the most iconic theaters in the US. They were able to squeeze in about six weeks, before the tour was postponed due to Covid.

So, they went back home, where they stayed for six months. It was longest the members of LBT had been apart from each other since 1998. Kimberly released her first children’s book about her adoption journey, Karen tried to tackle home-schooling, Phillip was writing music and Jimi was hunting. All the while, when no one was looking, ‘Wine, Beer and Whiskey’ started climbing the charts - despite not being played live at those iconic theaters. Now a full year after the release of Nightfall, the group has been nominated for two Grammy awards - Best Country Duo/Group Performance and Best Country Album categories. Last year may not have turned out the way they expected, but it didn’t stop Little Big Town remaining at the top of their game. 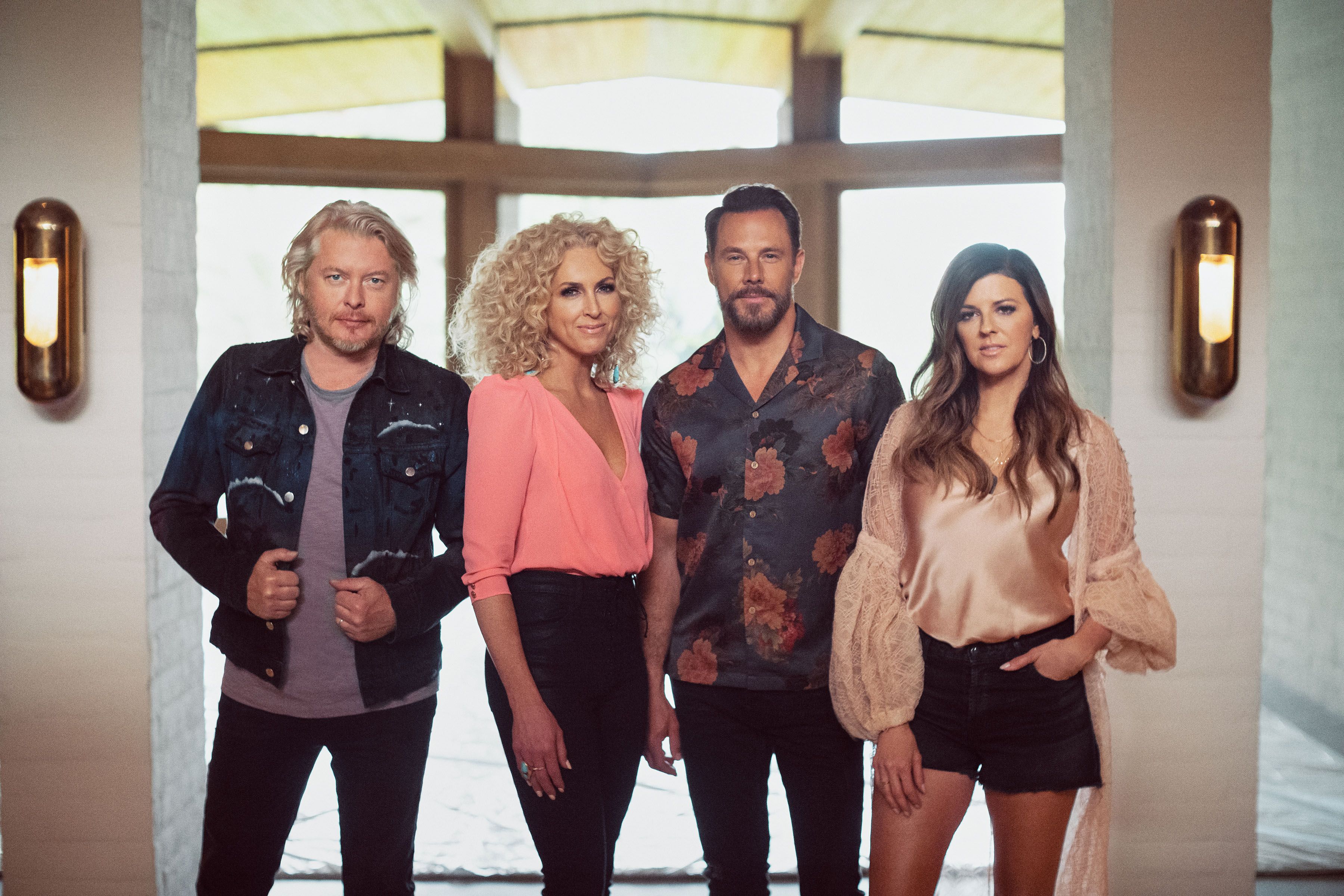 If ever a song was appropriate for this year, “Wine, Beer and Whiskey” has to be it. Give me the backstory. Philip, I know they refer to you as the cruise director - do you want to do the honors?

Phillip: We were writing with Tofer Brown and Sean McConnell on the road. We had been writing this really emotional ballad of a song all morning. We said “Ok, let's just take a breather. Let's get a five minute break”. I said, “Let's get something to drink. Anybody want anything? We’ve got some wine, some beer, some whiskey.” That's literally when Tofer started singing “The wine, the beer, the whiskey” - we were off and running and wrote it in like no time. It was fun.

It’s usually a sign that it's going to be a really good song when it comes out so fast, right?

Karen: Most of the time! When an alcohol song sounds like a nursery rhyme, then it's kind of a home run.

If people didn't know better, they would think that would be an issue with a three-year-old singing that song - but since we know you wrote it, it’s fine [laughs]. How different is it to watch this song climb the charts without you really getting to perform it live?It's just happening on its own.

Karen: It is weird! It’s the thing that we miss the most, because it’s what really makes the song take off for the fans, you know? Not being able to do this one live is kind of heart-breaking, but we will! We will in 2021, fingers-crossed and prayers said. It’s weird to be sitting here on a zoom call with you instead of in the studio or wherever, trying to promote a song. This song just kind of took off - the fans just found it, it wasn't a single at first and it was already taking off. During quarantine, I think people want escape music, you know? They are probably drinking and want things that are fun.

Absolutely! With you being in the industry for this long and having such a peculiar year where so much is changing, are there things you're learning to let go? Things that you no longer worry about?

Kimberly: I leave my house with dishes in the sink for the first time ever.

Karen: (To Kimberly) Have you turned off your alarms on your phone yet? We had to have an intervention. Kimberly was setting alarms on her phone and it would be dinging with her to-do list. ‘I've gotta do this. I've gotta go get tickets for this person. I've got to send a thank you.’ [laughs]

Kimberly: One day, when we were backstage in the dressing room, my alarms were going off and I was really stressed out. Karen said, “Do you think maybe you should stop setting all those alarms? Do you think that might be part of why you're so stressed out right now?” I really reduced my number of alarms from 15 a day to two or three. Everything radically changed.

Karen: I’m learning to home-school and be a good parent. I give up, I quit [laughs]. No, I don't quit being a parent - I'm resigned to the fact I'm just not a good home-school mom. That is not my expertise. I have an early childhood education degree, and you would think that it would come in handy and I could probably home-school everyone’s children, but I cannot seem to home-school mine.

I didn't know you had that degree - that is incredible.

Jimi: I let go of showering and trimming my beard [laughs], it’s driving them crazy.

Karen: Elijah (Karen and Jimi’s son) said, “Dad are you going for a Stapleton thing here? Because I don’t think that will work for you [laughs]”.

On the 2021 vision board, are you making plans now or are you just waiting to see what we will face in the new year?

Phillip: Yeah, we're making plans to get out on the road and work again. I'm ready. We're all ready.

Karen: We are believing. As soon as we get the green light from the powers that be, whoever that is, then we will take off and get back to work.

Little Big Town’s EP The Midnight Collection is out now via UMG. Their latest album Nightfall, featuring the smash hit ‘Wine, Beer, Whiskey’, is out now via Capitol Records – listen to the single below.