Morgan Wade’s hometown of Floyd, Virginia, is the perfect half-metaphor, half-reality that’s been frozen in time as a marker of her journey so far.

Every time Wade returns, she can’t help but relive her childhood memories, relishing any chance to wander back down the red dirt road that’s stretched further than her wildest imagination would ever allow her to go. That one-track path has ironically allowed her to travel the world, spanning from the hazy honky tonks of the deep South to the cozy pubs of London, England.

The theme of journeys plays a central role in 2021’s debut album, Reckless. But - as cliche as it may sound - the most integral is one of self-discovery. Wade’s willingness to let her guard down is the thread that runs through the heart of Reckless - her distinctive, gritty drawl detailing, with straight-no-chaser candidness, both her descent into the grips of alcoholism and her triumphant emergence on the other side.

The tug-of-war between setting out on your own path and longing for home also permeates the album. On ‘Northern Air’, we hear the tale of a lover moving away, evoking that wistful feeling of leaving a piece of yourself behind which always seems to accompany the excitement of travelling.

Although ‘Wilder Days’ is a right-person-wrong-time love song, it similarly betrays an underlying nostalgia for a younger, more carefree period of life.

By the time we reach the final piece of the puzzle - ‘Carry Me Home’ - Wade has found the middle-ground between feeling as though she’s “gone too far”, while also acknowledging the value of the path that has brought her to this point.

As Wade’s career continues to take her and her Virginia-indebted sound around the world, one thing’s for sure: this rising star’s life won’t be quietening down any time soon. But as they say, home is where the heart is; Wade has been determined to resist the pressure to move to Nashville, opting to stay grounded in the place her journey began.

Her loyalty to Virginia embodies her drive to stay true to the sound that she wants to create, irrespective of what’s dominating Music City and country radio. But just how much of an impact did home have on her sound, and on her approach to music as a whole?

Wade sits down to discuss her fond memories of the small town that raised one of country’s most exciting prodigies.

You’ve made a conscious effort to return to Virginia for shows such as the Floyd Country Store and the upcoming FloydFest. What do you miss most about your hometown in Virginia when you’re out on the road?

I definitely miss my family; that’s the main thing. Going home is very nostalgic for me, I just love that small-town feel.

Getting to go back and play at the Floyd Country Store was special - it’s a very small room and the tickets were gone very quickly, so not everyone could get in. It was really nice to shake hands with everybody that was there and see so many people that had supported me.

When you go back somewhere, you relive memories from your childhood, which always happens when I return to Floyd. 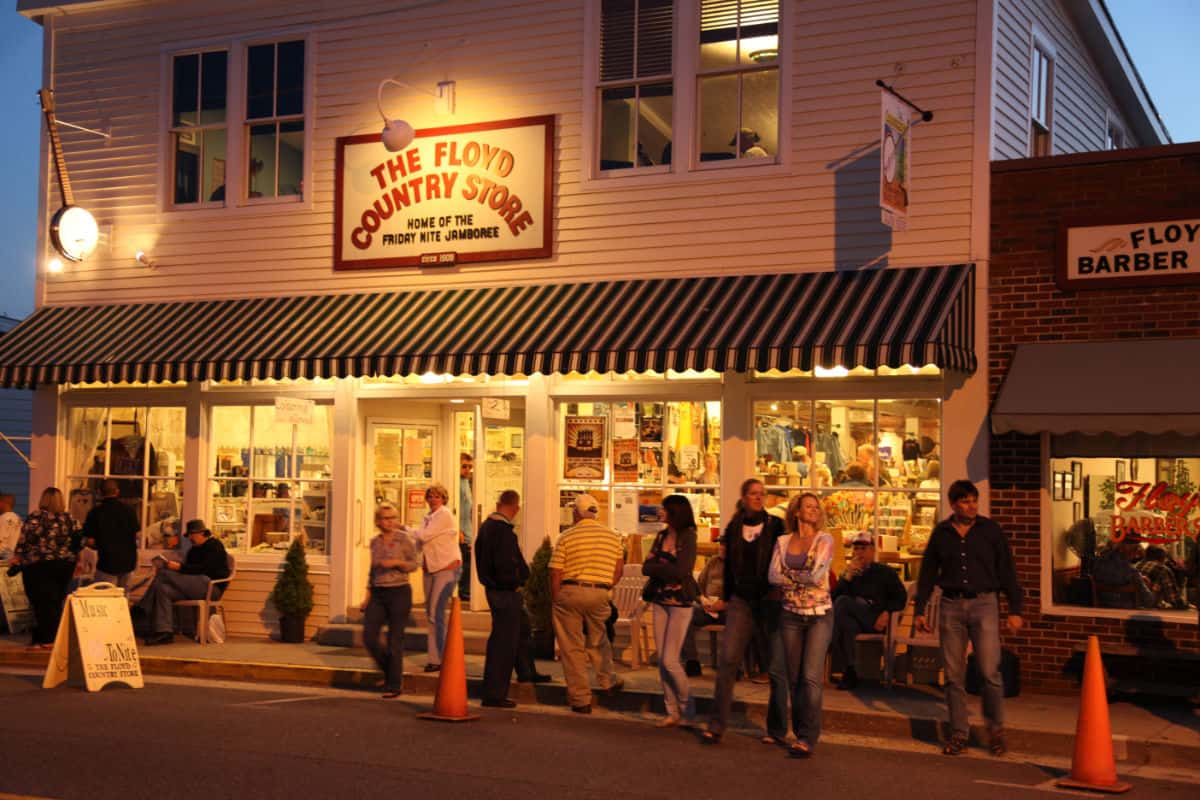 You started your music career with your band, The Stepbrothers. Where did you play your first show?

It was actually in Floyd, a venue called the Dogtown Roadhouse. It seemed very big to me back then, but in reality it’s only a very small room!

I spent my Friday nights with my Grandpa at the Floyd Country store. The music they’d play was not necessarily what I would be listening to on my own, but that was very influential to me because it gave me my first taste of live music.

When I was in high school, on Fridays I’d go eat and then just walk through town. Everybody would be hanging out in the street, listening to music. Regardless of whether it was the kind of music I’d be listening to by choice, it was still a great atmosphere that I wanted to be a part of. 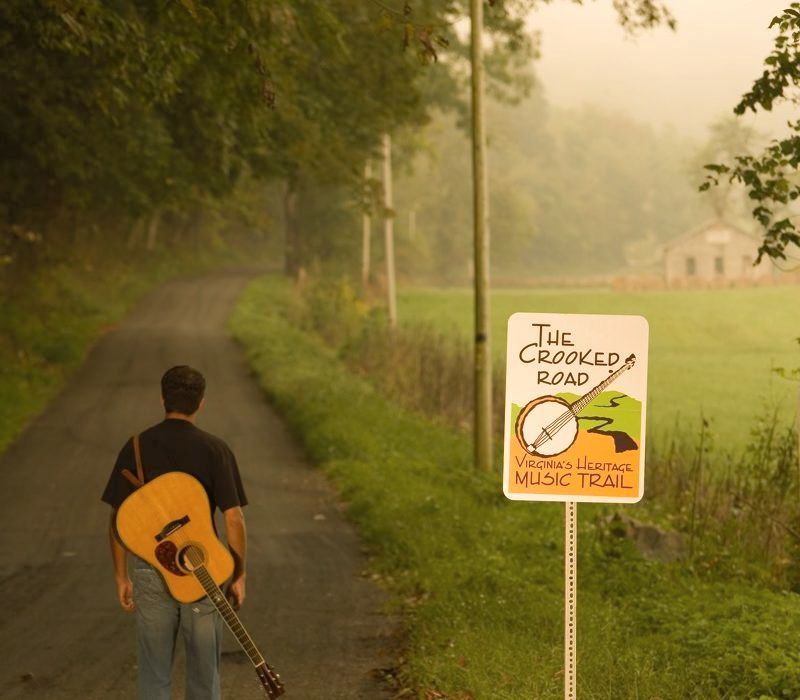 You’ve mentioned before that the music you were drawn to wasn’t necessarily just country. Bearing that in mind, if you could choose an album that reminds you most of your time growing up in Floyd, what would that be?

The album I return to a lot is a record I continually listened to in my car - Born to Die, Lana Del Rey’s first record. I can listen to every song on there, no skips, and I still listen to it today. It’s on constant rotation.

Patsy Cline hailed from Virginia. Did she have any influence on your move towards country music, albeit with a more rock and roll shade?

Yeah, my grandparents would always be playing Patsy Cline, Dolly Parton and Loretta Lynn - I grew up hearing them all. They definitely had a big influence on me.

Where did you write your first song?

At my grandma’s house. That was where I hung out most of the time.

Did your grandma ever get involved in the songwriting process?

Every now and then! But I was very secretive with my writing and my singing. I would let her hear little snippets. She still laughs about it and says, “She’d only play me a little bit and no more!”

You’ve been very open about your struggles with addiction and journey to sobriety. On ‘Through Your Eyes’, you talk about how children see the world through a more innocent lens. How does it feel now when you go back to Floyd, knowing what you now know and having had so many transformative experiences?

I would definitely say I look at it with fresh eyes. I spent a lot of my time just thinking, "Ugh, I want to get out of this place, I don’t want to be here". But now that I’m older and sober, I go back and I see that I was blessed to grow up where I did and to have the solid community that I have there.

That all comes with age. I see a lot of things differently, whereas before I just judged every town based on its bar, where I could have a drink and what I could do. Now I go home, and I see there’s a lot more to do here than just drink.

For someone who’s never visited Floyd, where would you recommend they go?

The Floyd Country Store! It’s a cool place and they’ve got great food, a brilliant atmosphere and it has a lot of history. The town’s very small, you walk down the little street and there are a bunch of independent shops that I like visiting. The guy that owns the Country Store also owns a record shop that’s directly across the road, which I would recommend checking out.

Did you feel pressure to move to Nashville, and what was it that inspired you to remain in Virginia?

I’ve had a million people tell me that I really need to move to Nashville. I said, “No, I’m not going to do that.” When I go home, I want to go home, and I don’t want anybody bothering me. The last thing I want to do is be out there where I am reachable and I can be found very easily.

When I’m touring a lot it’s very busy, so I think it’s good for me mentally and physically - and for my songwriting - to go back to the country and just try to live a more normal life than what my day-to-day is!

What’s a place in your hometown that you love that few people will know about?

There’s a great trail that runs through into Abingdon, Virginia. It used to be a railway. Obviously, the trains aren’t there anymore, so they turned it into this really long trail. It’s packed from April to November with people hiking and riding their bikes. It’s a really beautiful thing to do, especially in October when the leaves are changing. There’s one spot where you can see into Tennessee, North Carolina and Virginia.

The Deluxe Edition of Morgan Wade's debut album, Reckless, is out now via Ladylike Records / Sony